An Urgent Message for Doug Ford and Steve Clark: 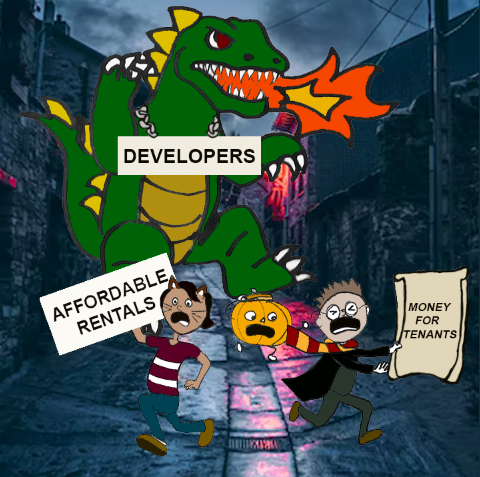 Unfortunately the Ford government is currently trying to gut those policies. They now want Minister Steve Clark to be able to impose "limits and conditions on the powers of the City." The City will be prevented from "prohibiting and regulating" developers in order to stop the destruction of affordable housing.

Right now many developers can't afford to tear down rental towers and replace them with condos precisely because they would have to replace the units. This new change will mean developers can make what they make best: money.  They'll be able to tear down most of our affordable housing stock and replace it with luxury condos wherever they want and the City will be powerless to stop them.

That is why we are calling on Doug Ford, premier of Ontario, and Steve Clark, Minister of Municipal Affairs and Housing, to stop favouring the Developer monster and allow the City to protect its affordable rental stock.