Nelson Clarke was one of the main founders of the FMTA.  Born in Regina in 1914, he was the youngest person elected to City Council in Saskatoon.

He attended the University of Saskatchewan, where he edited the university newspaper, The Sheaf and worked for the CNR.  He became a high-profile member and organizer for the Canadian Communist Party. After the party was banned during the Second World War, it ran candidates under the name Labour Progressive Party (LPP). Nelson ran as an LPP candidate in the Saskatoon City riding in the 1944 provincial election and was the leader of the LPP in Saskatchewan from 1946-1957. In 1950, he booked fifteen minutes of radio airtime to make a speech, but CFQC radio cancelled his booking, on the grounds that it was allegedly critical of Canada’s involvement in the Korean War and called for support for the controversial Stockholm Peace Petition.

In 1953, he ran unsuccessfully in the federal riding of Moose Jaw-Lake Centre. He moved to Toronto around 1957 at the behest of the Communist Party, where he both he and his wife, Phyllis, were party organizers. He ran unsuccessfully for mayor there in 1972. He also edited the Canadian Tribune, the party’s weekly newspaper. In his later years, Clarke became an advocate of tenant’s rights in Toronto.

In the year of his passing, the NDP moved a private rental bill to extend rent control to buildings built after 1976. Speaking at Queen's Park, NDP MPP Philip said the following:

"Yesterday I attended the funeral of a man I have disagreed with politically. I did not agree with his choice of political party, but very few people I have met have done as much for tenants in this city. Nelson Clarke was a man who devoted a large amount of his energies to working for those people. It was tragic that he passed away on the weekend.

I found some of the eulogies a little -- what shall I say? -- to the left of the political philosophy I might adopt, but none the less he was a man who had devoted his time and energy to try to educate all of us. Maybe his work on behalf of tenants might be well served -- and I cannot help but think he would appreciate it -- if at least one of the bills which he approved of and which he urged on this government were passed in this House. That would be a memorial to a man who I think was misguided politically but who was certainly very sensitive, very intelligent and very perceptive about what was needed on behalf of tenants. Perhaps better than any eulogy, the passage of this bill would be a tribute to Nelson Clarke."

Currently any housing built after 1991 is exempt from rent control.

A tenant from the 42 Glen Elm Tenant Association faces talks about what it's like to face the prospect of years of Above Guideline Rent Increases.

In April 2016, the Ministry of Municipal Affairs and Housing released a consultation paper which discussed Proposals to Encourage Small Landlords to Provide Rental Housing.

FMTA was a core stakeholder in the process and provided feedback about proposals.  Although feedback on the proposals was originally due in late April, the government extended deadlines to June 30th in order to provide more time for feedback from tenants.

1)    Require tenants to provide legal disclosure for any issues that they intend to raise at rental arrears eviction hearings to the landlord prior to the hearing.

3)    Lack of Fairness. Applications to the Landlord and Tenant Board are already dominated by landlords ‚Äì 91% of all applications.  These proposals will make it harder for tenants to bring up counter applications and appeal to Divisional Court.

1)    Zoning.  Provincial changes to the Planning Act for second units came into effect on January 1, 2012.  Did these changes encourage small landlords to provide rental housing?  Evidence-based analysis would provide an answer.

2)    Licensing.  Many small landlords receive no training on the requirements and difficulties for running a rental housing business.  Licensing could help better prepare them.

4)    Better law enforcement.  While good landlords follow the law in terms of repairs, charges and tenant rights, they face similar difficulties and penalties to landlords that flagrantly break the law.  Providing appropriate punishments for landlords who break the law and incentives for those who follow it could help spur rental housing growth.

Concerned about these proposals? The full list of changes can be found on the Ministry of Municipal Affairs website. Public feedback can be sent to [email protected]

Thorncliffe Park Tenants Walk in Support of Landlord Licensing! Join Them on May 29!

Thorncliffe Park Tenants Association would like to cordially invite you to our upcoming community event.

Hundreds of tenants, who call their vibrantly diverse Thorncliffe Park neighbourhood home, will be joining the "Tenants Walk Together for Change” in support of licensing landlords / certification of safe multi-residential buildings in Toronto and to say no to the proposed Ontario government changes to the Residential Tenancies Act.

Tenants across the City of Toronto and throughout Ontario are very concerned about the deteriorating conditions of their aging apartments. Millions of residents who rent their homes continue to live in victimized silence, some in deplorable conditions, with little or no repairs to their units and lack of property maintenance and repair standards. The gradual decline of tenant rights by a growing number of private residential housing providers and their property management agents must shift to valuing their residential rental consumers with a concentrated focus on good customer service.

Keeping all rental properties in a good state of repair and service standards, while obeying health, safety and maintenance laws is good for business. Tenant respect and dignity must remain at the forefront of the private rental housing industry.

The petition below notes that Above Guideline Increases (AGI's) for renters are taking it's toll on seniors, people on other fixed incomes and those who are struggling to make ends meet by working two or more jobs.  For example in the last thirteen years, the Brentwood Towers landlord alone, applied for and received AGI's nine times.

Tenants throughout Ontario are experiencing the same kind of increases, often, for capital projects.  Landlords are not required to disclose their profit margins but we the tenants are paying their capital expenditures.  For example last year The Brentwood Towers Tenant Association (BTTA) tenants were asked to pay $1m in extra capital costs and this year $2m.  The Residential Tenancies Act needs to be amended, when it comes to AGI's, or eliminated all together.

Please sign the BTTA petition below and support hardworking Ontarians who pay high rents already and are hit with more increases that are not fully understood by the public.

Volunteer with the FMTA

Throughout FMTA's history, volunteers have formed the backbone of the Federation by volunteering through our affiliated tenant associations and through our board of directors.  Learn more about these volunteer activities here.

Now the FMTA is launching a new volunteer program that lets you get more involved with tenant rights in Toronto!

Get involved with the FMTA as a graphic designer, a FMTA Committee Rep, a membership liaison, a translator or social media coordinator.  Volunteer position descriptions are attached.

Prospective volunteers are required to read our volunteer orientation package and sign a volunteer commitment form.

On Tuesday, November 22, 2011 there will be a rally in Toronto for National Housing Day

"Between 150,000 and 300,000 people are homeless in Canada, and millions more are living in inadequate or unaffordable housing. And yet, Canada is the only major industrialized country without a national housing program.

Aboriginal peoples, racialized communities, people with disabilities, women, seniors and other marginalized groups are disproportionately affected by housing insecurity. On National Housing Day join the Right to Housing Coalition at noon at St. James Park/Occupy Toronto for a rally to call for a national housing strategy to end homelessness.

The Right to Housing Coalition (R2H) is a group of people facing homelessness, advocates, service providers, and organizations, working together for the right to housing. In May 2010 four individuals and the Centre for Equality Rights in Accommodation filed a court case against the Ontario and federal governments, asking the court to recognize that, by making policies that cause and perpetuate homelessness, the governments have violated the Charter of Rights and Freedoms.

R2H has provided ongoing support to the legal challenge through research, public forums and other events, and has participated in the national days of action for housing as part of the Red Tent campaign.

Endorsed by: the Stop the Cuts Network, the Dream Team, and the Advocacy Centre for Tenants Ontario."
- From the Housingworkers.ca website 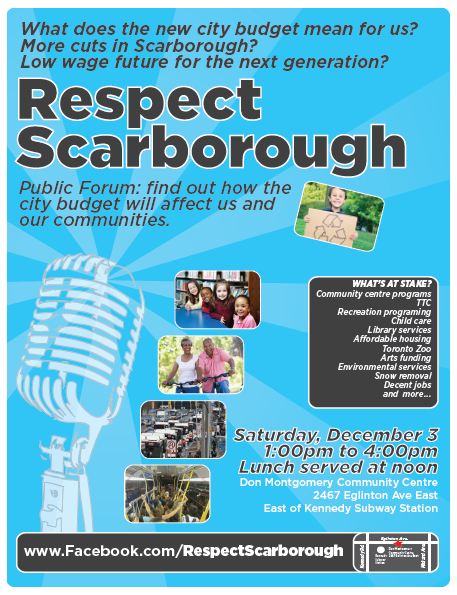 Public Forum: find out how the city budget will affect residents of Scarborough and their communities.

The Vote for Housing website www.voteforhousing.ca is now up and running. You can find the four housing fact sheets, September 8 housing debate flyer and Vote for Housing's Statement on Livable and Affordable Housing for candidates and parties on the site.

The City of Toronto is currently reviewing consultant reports which they have commissioned to find savings in the Toronto City budget. The City is facing a shortfall between $400-$750 million for next years budget.

The consultant reports (compiled by the firm KPMG) have been released throughout this week and last and can be read here:

The FMTA is concerned that some of these cuts will negatively affect tenants. As such we urge our allies, members and friends to ensure that tenant voices are heard at deputations.

Committees will be meeting throughout this week and next to discuss the reports and recommended cuts. If you would like to make a deputation, please contact the FMTA at the phone number or e-mail below.

Committee meeting times for this week and next are as follows:

No meetings are scheduled.

Together We Are Strong!